Intents Festival 2019 is sold out by the organizer

Intents Festival has done so again, in less than 20min sold Intents Festival weekend ticket and camping end. Just like the previous editions for 2018 and 2017, the festival's usual tickets are more or less sold out.

Why do they sell out so fast?

Most likely because the Intents Festival stands out a little extra from the crowd compared to other festivals. Intents Festival focuses on creating an atmosphere throughout the festival. By this we mean that you do not just care to decorate the scenes only. The organizer also adds tremendous assurance that the whole campsite should be a decorated experience and full of activities. All the corridors and joints to / from the dance floor and at the campsite are also these ohhurt beautifully decorated.

Another factor is that because the Intents team organized the festival, it was so good that they once again received the "Best Festival" award in all Benelux categories. Benelux is the region with Luxembourg, the Netherlands and Belgium. It is thus a really great merit to get this award given that there are three countries participating. In addition, there are many music festivals in this region of the world that make the award even more worthwhile.

Why should I go there?

To experience the amazing atmosphere and atmosphere that the organizer creates! The festival is a bit like Defqon.1 Festival fixed in a miniature format. You do not need to walk 15-20min to get to a scene that is at the other end. Camping is relatively small and cozy which means that you can quickly and easily reach the festival.

So take the chance and go there for the festival is something very special even if you are used to traveling in the Netherlands.

Can you still book with you?

We have a limited number tickets and travel packages remain at the time of writing this article. Intents Festival is, as I said, sold out every year both through the organizer's own channels and via Coretours. 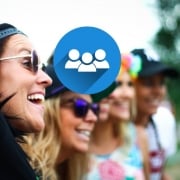